The comparative study of philanthropy in human societies, cultures and the development of humankind. 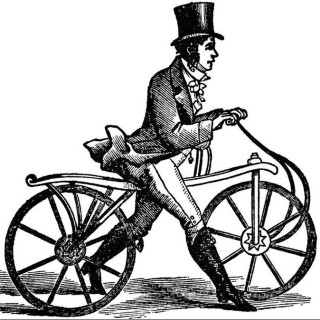 Building the Business of Benevolence & Bringing you the latest news in Society, Culture, Wealth & Philanthropy.

It only appears when there’s rain.

“It’s sort of the ideal Seattle art. It’s going to rain no matter what. Why not do something cool with it?”

Local magician Peregrine Church has created 25 to 30 such “rainworks” around town, with more to come. He hopes the sidewalk messages will bring a little cheer to people who are sick of the blah weather.

To write their messages, Church and his friend Xack Fischer spray a biodegradable, environment-friendly, water-repellant coating onto the sidewalk through a stencil. When it rains, the surrounding concrete gets wet, but the sprayed bit of concrete stays dry.

Inspired? Here’s a two-minute explainer on how to make your own Rainwork.

(NARA ID: 7788303) Since the first European settlers arrived, Americans have enjoyed a drink. At times, many of us have enjoyed a lot of drinks. But other Americans, fearing the harm alcohol could do to society and to individuals, have tried to limit or even stop our drinking defining when and where we could consume alcohol.

(NARA ID: 16647175)These two, different views of alcoholic beverages run throughout American history. Sometimes they have existed in relative peace; at other times they have been at war. “Spirited Republic: Alcohol in American History” uses National Archives documents and artifacts to show how government programs and policies changed over time and to illustrate the wide variety of views Americans hold about alcohol. The stories they tell echo today’s debates on regulation of drinking and the legalization of drugs.

Join a live #ArtTalk  with the National Women’s History Museum about History from the Women’s Perspective!
History is full of exciting stories about interesting people who achieved amazing things. All too often, however, the popular narrative has not included women. Using National Women’s History Museum’s newest exhibit on the Google Cultural Institute “New Beginnings: Immigrant Women and the American Experience”, we’ll discuss how to incorporate women’s perspectives into historical stories.

Browse through the online exhibit  and submit questions prior to the event!

END_OF_DOCUMENT_TOKEN_TO_BE_REPLACED

Independent Lens is a film festival in your living room. Since 2003, Independent Lens has presented more than 300 films to public television audiences. The Emmy and Peabody Award-winning series is broadcast on the PBS national schedule on Monday nights at 10pm. Independent Lens is the largest showcase for independent documentaries anywhere on U.S. television, premiering 22 new films each season. The series is curated jointly by ITVS and PBS.

Independent Lens is currently seeking submissions of completed or near completed programs for broadcast during the October 2013 – June 2014 season.

Independent Lens films are often character driven stories, and are known for compelling storytelling, innovation, and diversity. Independent Lens welcomes individual expression and is committed to presenting diverse points of view, on topics suited for a national audience.

When selecting programs, Independent Lens considers a range of factors, including the quality of the filmmaking, the timeliness of the story, and audience appeal. Programs should offer a fresh perspective, especially if the topic has been explored on other PBS series.

Independent Lens seeks to present the U.S. television broadcast premiere, however we will consider a work of special merit that has had very limited television exposure (such as broadcast on local public TV station).

Hometown heroes including Josh Hutcherson raise money for homecoming of 17 year old girl, now paralyzed from the waist down after a car crash in May 2012. We wish Abby Marsh and her family all the best. After all, it’s Florence Y’all! Read news coverage from NBC’s local affiliate, WLWT.